What is the Core?

According to Kibler in his article "The Role of Core Stability in Athletic Function", the musculoskeletal core of the body includes the spine, hips and pelvis, proximal lower limb and abdominal structures ". (1) "Core stability is defined as the ability to control the position and motion of the trunk over the pelvis to allow optimum production, transfer and control of force and motion to the terminal segment in integrated athletic activities.

The core muscles involved can include the abdominals (rectus abdomens, transverses abdomens, internal oblique) multifidus, parasinals and gluteals in the back, the diaphragm at the top and the pelvic floor at the bottom. With multifidi and the abdominal muscles, it has been shown that only a small effort is required to stiffen the spinal segments.(2)

Core stabilisation is integral to most rehabilitation programmes for all parts of the body. Therefore, when rehabilitating and conditioning the knee, the rehab programme will also incorporate core stabilisation and hip strengthening. Similarly when progressing upper extremity rehabilitation with scapula retraction, arm abduction and external rotation, trunk stability would also be integrated.

Throughout the rehabilitation protocol there should be a progression to functional activities and muscle activation sequences. Rehabilitations should incorporate a flow of exercises that build a basis of stability and force generation. By doing this you can then progress distally to establish control of the forces while allowing maximal mobility of the distal segment. The core in the central part of this flow.

Dr Jan Naughton received her PhD at Sydney University where she was lecturing in Sports Medicine and undergraduate physiotherapy. She specialises in shoulder injuries and has a sports physiotherapy practice in Wahroonga on Sydney's upper north shore working with two other specialist colleagues.

Is there a correct posture to lift? 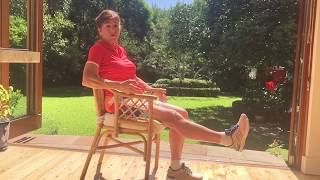 Knee exercises and stretches for over 60s

What is the Core?

The Importance of Exercise